I wrote this post on April 1st 2015, which was at a very busy time for me, so I never got around to posting it.

Once I wrote a new post today, I realized, I should probably put this one up!

For particular reasons, I didn’t think I’d release this post, but I feel as if it is part of my journey, so it has to come along. I don’t try to talk things religious, but these are the things that come to me. As you read this post, please don’t take any offense: know that my personal belief is that Jesus was possibly a yogi. Also, remember that this post was almost lost in the ether.

Often it feels like we have our day, our weekend, even our life planned out ahead of us. How many times are these plans altered? Can we remain open in these moments, and go with the flow?

In an alternate reality I am practicing a 1 hour yoga practice I am to teach tomorrow night; however, I awoke to a lovely comment by a “fan of my writing” in which I read just before I went to my 90 minute meditation class. So, thank you fan. I only write when I feel compelled to, and after what I just experienced, I feel compelled to:

My ankles snapped with each step, and echoed across the room as I walked through the space of people already seated for meditation. The acoustics are amazing in this room, maybe a little too good. As I took my seated position, more snapping, now from my knees. I thought to myself, “These people probably know it’s me when I walk in!”

A gentle stretch, and then to finding my alignment. I stacked my skull over my pelvis, and realized, “Hey, I should begin my meditation with the beginning/centering I’m to teach tomorrow.” I have been practicing this sequence all week. This breathing practice of centering has become a foundation of my practice. I’ve grown quite fond of this sequence, as I had learned it months ago, but as I once read on a chinese fortune “if you wish to learn, teach.” Centering is so important, so why am I not doing it before meditation?

Through the series of breath centered awareness techniques I spent about 10-20 minutes tuning in deeply. Once the sequence was over, I merged right into my Surfer Breathing without skipping a beat. Because of this centering, my whole body felt lighter. Since my body felt lighter, my mind felt lighter, too.

Keeping this flow of awareness, I kept the last layer of my centering practice alive:

Witnessing from behind your eyes.

Magnetized to a still, centered point behind my eyes, I watched myself meditate. Ticking, the ticking of the clock came into my ears. This sound became audible for the first time in months. I didn’t let it bother me, I just watched it, and it eventually disappeared.

Next to me, just a couple of feet away, a middle aged man began to snore. The snoring continued for most of the meditation, but again, I watched it. Christine was not affected by it, “I awareness” was watching her, watching it.

Overcoming this man’s snoring was actually elevating my practice right before my eyes. My body became flooded with feelings of joy, so I just watched those feelings, too.

Sometimes when I meditate, I’ll receive flashes of images. They are usually of Hindu deities or something of the like. Well, today I was receiving beautiful and peaceful images of Jesus. The one that stood out was a carving of him, with the Sun creating a ray, which became his halo as he tended a peaceful flock of sheep. As the warm fuzzy feelings intensified, I saw Buddhist mandalas, and images from Persian rugs flying all around my mind-space.

As the practice was most likely coming to an end I realized that this was the easiest time I ever had meditating. Usually around the 50 minute mark I’ll feel like I need to squirm, but I just sat, watching from behind me eyes. Shortly after this realization, an amazing moment happened. It felt like someone had taken the eraser end of a pencil and pushed it into my third eye space, just slightly above, and in between my eyebrows. As soon as this happened my eyes reacted to this vibratory bliss. Instantly, my eyes melted into waves like of the Buddha’s.

Whoah! The moment was a little shocking, as I have seen these eyes many times before, but to feel them for myself felt very deep. Maybe I was being blessed to progress along my travels to somewhere. Maybe I was unlocking a new space with this secret key. Common in these moments, my personal shock quickly ended the experience, my wavy Buddha eyes. So, still in my deeply meditative state, I watched from behind my eyes, and the eraser came back and pushed.

I was more in tune with the feeling/vibratory level of things so I tuned into them. I realized that they were in absolute gratitude, bowing down to the white light. Taking cue, I energetically followed suit. My gratitude merged with the energy beaming down on me. Everything present was as one. Then my teacher’s alarm went off, so apparently that was enough for today.

My teacher always ends each meditation with a segment from one of Bhagwan’s CDs. Even though his pace of voice does not mesh with my personal style, the timing of his words always blow me away.

Bhagwan began this segment by talking about what I just went through: how I had just watched from behind my eyes. He described this as witnessing from within. Watching life whirl on around you, to not be overtaken by it. He likened this teaching to overcoming the state of depression:

Imagine you are standing at the shoreline, watching the ocean. Start to walk into the ocean of mind, of depression, and keep going. It will overtake you. Eventually the current will take you, and it is very difficult to get out. It is very difficult to get out of depression. However, if we can remain at the shore, and just watch… oh, I forget what he said… but what’s the worst thing that could happen from the shoreline? Sun burn?

As in the sunbeam halo?

There is a lot to learn from Jesus, especially if one views him as a yogi, as a master of his mind.

One of the greatest yogis.

A yogi is one who

“pierces through the sun by means of the various yogic techniques.”

The ancient yogis taught that each of us replicates the world at large, embodying “rivers, seas, mountains, fields…stars and planets…the sun and moon” (Shiva Samhita, II.1-3). The outer sun, they asserted, is in reality a token of our own “inner sun,” which corresponds to our subtle, or spiritual, heart. Here is the seat of consciousness and higher wisdom (jnana) and, in some traditions, the domicile of the embodied self (jivatman). 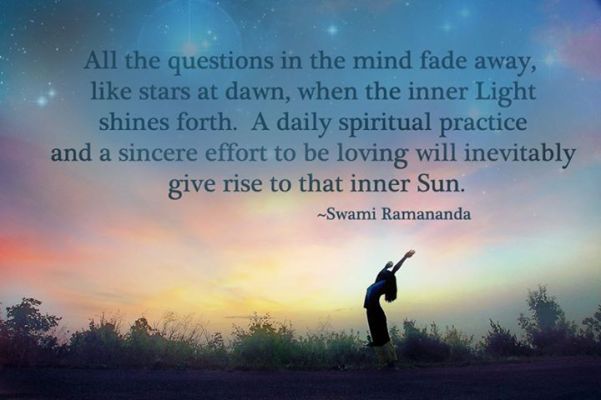